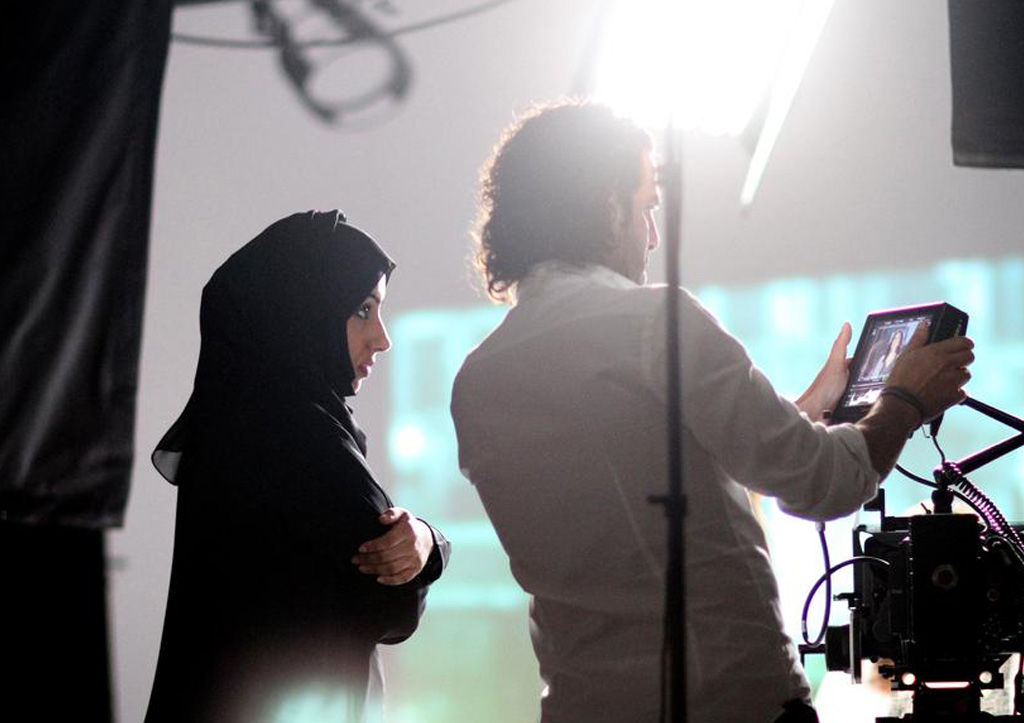 Nahla Al Fahad, who has been quietly compiling a portfolio of work over the past 10 years, says her aim has always been to make films that are both original and offbeat.

When the in-demand Emirati director finally gets some time to herself, you would imagine she would allow herself a short moment of self-reflection.

Three years ago, Al Fahad was rushing around a Sharjah warehouse, coordinating lithe dancers as they gyrated to the sound of Diana Haddad’s latest pop hit, Wadi Haki. Today, she’s reflecting on her first documentary feature film, The Tainted Veil, which deals with attitudes towards the incredibly emotive subject of the hijab. And yet the only thing Haddad is wearing on her head in that pop video is a pair of large, bright pink headphones. “Well, I’ve always aimed to make distinctive work,” Al Fahad says with a laugh. “Work that people can say: ‘Yes, Nahla did that.’”

It’s such dedication to her subject matter that has propelled Al Fahad to the point where her first soap opera, the Kuwait-based Wars of Hearts, will be broadcast on MBC1 after Ramadan. And later in the year, she will begin work on Maryam, her debut feature film, which she has written and will direct.

So although years of working on corporate videos, commercials and videos for government ministries, plus a regular diet of music videos, might have seemed prosaic, it was all part of a gradual process to improve and find her style. Meanwhile, people were watching her development with interest.

“The executive producer of The Tainted Veil, Sheikha Alyazia, selected me to direct because she’d seen my work,” says Al Fahad. “I met her and was so excited by the project because the topic of the hijab is so emotive. So I did what I always do – I worked really hard.

“It was tricky, too, because obviously it was material Ovidio Salazar had shot [back in 2008]. So I spent months watching it all first. I needed to visualise how it might look by the end.”

Al Fahad was determined not to let this opportunity pass her by – not least because the chance to work on a 90-minute film is still rare. In a sense, her career mirrors the upturn in fortunes of the UAE film industry, given that Al Fahad graduated at the turn of the millennium.

“I wouldn’t say it’s easier to make films now than it was back then, but there is certainly more backing,” she says. “We have the Dubai Film Festival where we can show our productions. And having Star Wars shoot here – obviously it was not an Emirati director in control, but broadly speaking, it means that people in the Emirates are working in films in all sorts of roles and that’s important to get the sense of an industry.

“Ten years ago, it was difficult for someone like me to have a career in film. Right now, though, it’s really encouraging.

“What I would say is that it’s important not to get too obsessed with Emirati directors,” she says. “What’s more important is Emirati producers and production companies. That’s how you can start to make films and grow the industry.”

To that end, Al Fahad set up Beyond Productions in 2009, which helps up-and-coming filmmakers and students in the UAE and Lebanon. It also worked on The Tainted Veil and will be involved with her feature film.

“It’s going quite well,” she says. “I’m so excited about Maryam – hopefully we’ll start filming at the end of August in the UAE and the UK. It’s about the relationship between a girl and her grandfather, who she thinks has passed away while she studied in the UK. But she finds he is still alive and there are lots of adventures around that. I’ve spent three years writing it, so to see my debut feature get made will be a great thrill.”

But before that there’s the more pressing matter of a 30-part soap opera. Given she’s spent so much time on Wars of Hearts, Al Fahad is endearingly excited about seeing it on the small screen after Ramadan. But it’s understandable as it’s another first for this ambitious and innovative director.

“Wars of Hearts was so much fun to do,” she says. “I enjoyed it a lot – it was my first drama series. I’m really happy at how it’s turned out.”

And as The Tainted Veil prepares to make the rounds of the festival circuit, “happy at how it’s turned out” is a pretty apt way of describing Nahla Al Fahad’s ­career, too.